Where have we been?

It has been a while since we updated you on the Rio Grande Forest Plan revision. Here is what we have been up to and what to expect in the coming months.

The public comment period for the draft forest plan and draft environmental impact statement (DEIS) ended in December 2017. As a result we received over 450 letters. About 220 of these were form letters, and around 40 were received after the close of the comment period. Each and every letter has been read and reviewed for substantive comments on the draft forest plan and environmental impact statement.

Letters that arrived after the close of the comment period were read and incorporated into the comment responses. However, letters submitted outside of the specified timeframes may affect the sender’s ability to participate in the objection process.

Any letters that were specific to concerns outside of the forest plan revision effort were forwarded to the appropriate staff.

What did we do?

When reading the letters, comments were identified and categorized by resource topics. Similar comments were then combined. Next resource specialists prepared responses to the comments identified. Some comments required additional explanation in the plan or analysis, while others required clarification. All of the comments and their responses will be included in an appendix to the final environmental impact statement.

What did we hear?

Letters and comments covered a wide variety of topics. A recurring comment addressed how desired conditions, standards, guidelines, and management approaches were formatted based on 2012 planning rule direction. We considered all the plan components and worked to clarify the intent of the direction by rephrasing, rewording, or moving plan components. The results should present direction that is clearer to both the Agency and the public.

A collaborative study regarding response of Canada lynx to beetle kill in the spruce-fir ecosystems was referenced on pages 210 through 211 of the DEIS. The study had been initiated but not yet completed when the draft plan and DEIS were made publically available. The study investigated how Canada lynx are responding to mortality in the spruce fir ecosystem. Preliminary results of this study are now available. Summaries of this study can be found at  https://www.fs.usda.gov/detail/riogrande/landmanagement/projects/?cid=fseprd479410. We considered these site specific results in addition to comments received to adjust forest plan lynx direction. Consultation with US Fish and Wildlife Service on threatened and endangered species is ongoing. Plan components relative to Canada Lynx will be based on public comments, the study, and the outcome of the ongoing consultation.

What to expect in the future?

Loose ends are still being wrapped up and when completed we will post a final environmental impact statement, a final forest plan, and a draft record of decision to the website. The notice of availability of these documents is expected to be published in the Federal Register and in the Valley Courier in early 2019.

The objection filing period begins when the documents are released. The objection process, allows individuals and entities to file an objection to the decision before the decision is finalized. The process allows participants 60 days to file objections.  After the close of the objection period, the Agency has 90 days to meet with objectors and work to resolve objections. There are two potential objection opportunities when revising a forest plan. Objections related to the final environmental impact statement will be reviewed by the Rocky Mountain Regional Forester. Objections specific to the species of conservation concern list will be reviewed by the Chief of the Forest Service. To be eligible to object, you must have submitted formal comment between September and December 2017.

Those interested in how the objections are resolved may participate during objection meetings as Interested Persons. Interested persons must file to participate within 10-days of the notice of objection.

The previous Forest Planner, Erin Minks, has left the Agency and Judi Pérez is now leading the revision effort. Judi had previously been assisting the project, but she recently took over as team leader. If you need further clarification please contact Judi at (719) 852-6240.

More information on the forest plan revision effort can be found on the Forest webpage at https://www.fs.usda.gov/detail/riogrande/landmanagement/projects/?cid=stelprd3819044. 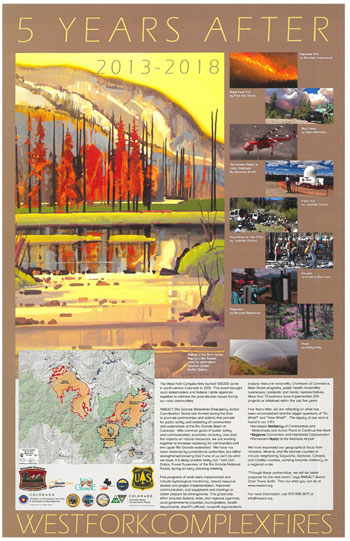 LAKE CITY, CO., (August 21, 2018):  This summer, we celebrate the five-year anniversary of the West Fork Complex fires – the West Fork, Windy Gap, and Papoose fires – which burned 110,000 acres in the south-central San Juan Mountains.  A group formed during the fire to work more resilient forests and communities and to address post-disaster impacts.  This poster celebrates the work of our partnerships.

Resiliency is found in many forms, including the ability to see “beauty in the burn” which is what artist Stephen Quiller named his series of Papoose Fire paintings.  Our commemorative poster features the artwork of Mr. Quiller, an internationally-renowned watercolor painter whose work reflects the spirit of the San Juan Mountains.  “When the smoke cleared, I began a series of paintings on the burn,” Quiller recalls.  His work May by Little Squaw is featured on the poster.  The full series can be viewed at quillerygallery.com under Fine Art.

The poster also highlights recovery of the forest landscape and work done by our many partners.  Free posters are available now at Visitors Centers in Lake City, Creede, and South Fork and Forest Service offices in Creede, Del Norte, and Monte Vista.   The poster will also be uploaded to our website for viewing.

This poster is a companion piece to the original West Fork Complex fire poster that included the fire perimeter map and Move Up, Not Out safety messages.

RWEACT -- together with the Rio Grande National Forest and funded through the Colorado Water Conservation Board, the Department of Local Affairs, and the Office of Emergency Management – works to promote partnerships and actions that provide for public safety and resiliency of communities and watersheds of the Rio Grande Basin of Colorado. More organizational information can be found at www.rweact.org

ALAMOSA, CO., (August 2, 2018):   Better radar will soon be possible in our region for timely and more accurate weather information and stream forecasting.  Following the West Fork Complex fire, temporary weather radar was installed in the Upper Rio Grande and Wolf Creek Pass for three years to monitor conditions.  A NOAA mobile radar was rented for two winters to collect data for water supply modeling for the Rio Grande and Conejos Rivers.

The benefits of radar include improved public safety with severe weather forecasting for early notifications, more accurate water resource modeling for water rights and administration, and transportation needs such as aviation, storm tracking, and avalanche forecasting.

Funding for the $1 million to $1.3 million project comes from the CWCB Projects Bill, CDOT, an Executive Order through RWEACT, and the Capital Development Committee.   The radar will be located at the Alamosa County airport.  Bids are due September 5th.

RWEACT -- together with the Rio Grande National Forest and funded through the Colorado Water Conservation Board, the Department of Local Affairs, and the Office of Emergency Management – works to promote partnerships and actions that provide for public safety and resiliency of communities and watersheds of the Rio Grande Basin of Colorado.

This email address is being protected from spambots. You need JavaScript enabled to view it.

Join local forest and fire experts to learn about wildland fire management, explore the impacts and recovery from the West Fork and Million Fires, and understand how to protect your home from future fires. An evening of free food, beer and presentations on September 7 will be followed by a full day tour on September 8 of areas effected by two of the largest fires in Colorado history.

Pagosa Springs, CO –  In 2002, the Million Fire burned 9,346 acres near South Fork, CO, costing over $9.8 million. In 2013, the same area was struck by the West Fork Fire Complex, which burned over 109,049 acres of the San Juan and Rio Grande National Forests and cost over $31 million. Five and 16 years later, we are bringing together communities, land managers and scientists from both sides of the Continental Divide to reflect on the Million and West Fork fires, discuss recovery from fires, and think about the future of our communities and forests.

On September 8, from 9:00am to 3:00pm, there will be an opportunity to tour the burn areas with resource specialists, emergency responders, community members and land managers. We will meet at the South Fork Visitor Center, organize into vans, and drive to diverse burn areas to talk about everything from water and wildlife impacts, to home protection strategies, to economic impacts and fire dynamics. Lunch will be provided by the San Juan Headwaters Forest Health Partnership and Firewise of Southwest Colorado. Wear appropriate shoes, bring water, and be prepared for weather.

Although FREE, registration is required for both events so that we can make sure to have enough food. Find the full agenda and register at mountainstudies.org/events/bridgingthedivide.

A documentary by Bev Chapman

Free Viewings held in Creede and Lake City. The video screening will be followed by light snacks and a question/answer conversation.

This month is the five year anniversary of the West Fork Complex fire in our region. Please join us in celebration, finding out what work has been done, and how we are better prepared for our next event.  Videographer Bev Chapman created the Big Burn video during our 2013 event. Come and see this new documentary featuring Five Years After information. 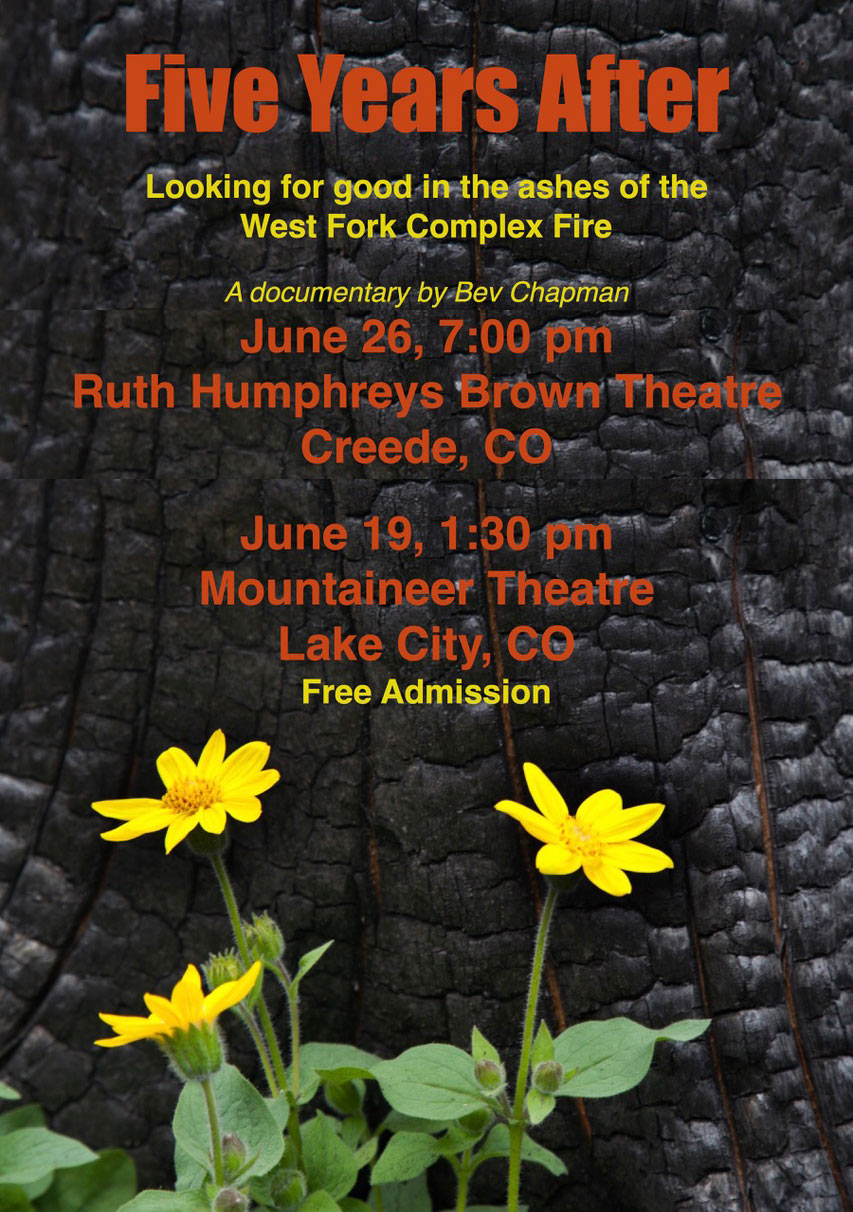