Economic Recovery funds from the Office of Emergency Management and the Department of Local Affairs were awarded to RWEACT.  A post-disaster plan was developed.  One goal sought to increase heritage tourism sites in the region. This regional emphasis between the three counties increases opportunities for residents and visitors who have an interest in Colorado mining history and connects our geographical locations of historic mining operations. 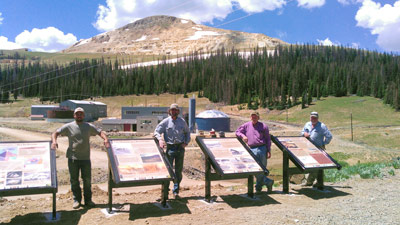 In Rio Grande County, the Summitville project was identified as the highest priority.  At 11,500 feet above sea level and located 25 miles south of Del Norte, gold was discovered in Wightman Creek on South Mountain in 1861; mining operations didn’t begin until ten years later.  By 1885, more than 250 individual claims were being actively mined.  For decades, operations were sporadic.  In 1984, Galactic Resources, Ltd. began large-scale open-pit operations.  The Environmental Protection Agency (EPA) and the State of Colorado became stewards Summitville in 1992. Learn more about the history of the site, and future plans for historic preservation and outdoor recreation.

RWEACT partnered with Rio Grande County, CDPHE, Forest Service, EPA, and many others to design and install interpretive signs at the site.

RWEACT partnered with the Creede/Mineral County Visitor Center to update and replace interpretive signs along the Bachelor Loop, as well as update and print the tour guidebook. RWEACT worked with the Ute Team and the Lake City Museum to create an interactive mining display and computer program for a downloadable tourist feature that can be taken along the Alpine Loop to view information and historical photographs of each mine. RWEACT also assisted in additional work at the Ute Ulay site for interpretive signage.